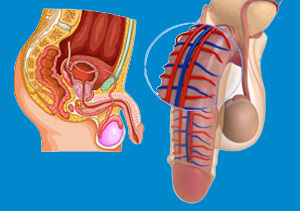 Male penis anatomy: The human penis is composed of three cylindrical sponge bodies. The corpus cavernosum penis consists of two single cylinders, which are volume wise the largest and most important for the erection of the penis.

The corpus cavernosum penis consists of two single cylinders, which are volume wise the largest and most important for the erection of the penis.

These two erectile tissue are connected by small channels in 75% of their respective length.

The remaining 25% of the two cylinders, near the body, are divided and adhere to a fixed membrane at the pelvis. Each cylinder is surrounded by the tunica albuginea , a thick and massive fabric sleeve. The whole penis is also surrounded with a stable membrane, so a penetration becomes possible once the penis fills up with blood.

Before you start venturing into the penis exercises , it is very important to understand what one is dealing with on which things need to be considered! This way you will prevent injuries. 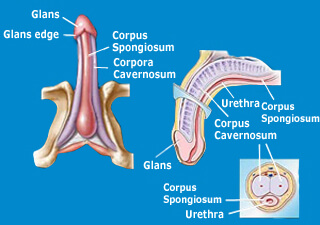 In the picture here you can see the two main erectile tissues of the penis, the corpus cavernosum penis. During an erection, the blood flows into the chambers, the tissue swells up and the penis engorges.

As the two chambers extend, pressure is exerted on the tunica albuginea and blood get stored in the corpus cavernosum penis. Thus, the penis becomes stiff bringing about an erection.

Also, the corpus spongiosum penis fills with blood, although the amount here is lower than in the corpus cavernosum penis. This way the sensitive tissue around the urethra is protected and the ejaculation is being enabled .

The absorption capacity of the corpus cavernosum penis is the key element for how big the penis can get in a fully erected state.

The maximum penis size is limited by the chamber volume. The majority of all penis enlargement techniques focuses on enhancing the capacity of the tissue chambers, to increase the blood amount in the penis during an erection.

In our penis enlargement workshop you can learn to increase the absorption capacity of this tissue, in order to store a larger blood amount in the penis during an erection, thereby achieving permanent penis growth.

During the erection the three cavernosum bodies absorb blood like a sponge. The penis grows and raises up. In the process certain blood vessels on the penis edge get squeezed and less blood is allowed to flow back may than is flowing in: the erection is maintained. This condition is normally maintained until the ejaculation or until the end of the erection.

The epididymis are envelop the testicles . This tissue is used for storage, maturation and transportation of sperm cells originating from the testicles.

The vas deferens are small tubes channeling the semen to the prostate . Arriving there they get activated by enzymes before the ejaculation. During a male sterilization procedure these are cut and tied up.

The testicles of a man are a large number of closely attached wriggled tubes. It is where the sperms are produced. The production of a mature sperm is a continuous process which takes about 2 months. 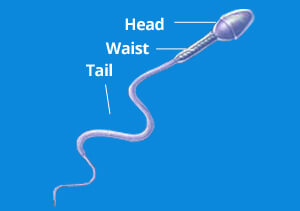 A man produces about several hundred million sperms a day. This process is called spermatogenesis. Semen, that is not ejaculates, dies and gets broken down and disposed of.

In addition are the testicles enclosing cells that are responsible for producing the male sexual hormone testosterone . Spermatozoa are the smallest and most complex cells of the human body. All the characteristics a baby will inherit from his father through reproduction are in the head of the sperm.

The coat is covered by a special enzyme, which enables the spermatozoa to break through the shield of the ovum and to nest in there. Each separate sperm consists of a centerpiece and a prolonged tail, in order to swim faster during the fertilisation to reach the ovum first.