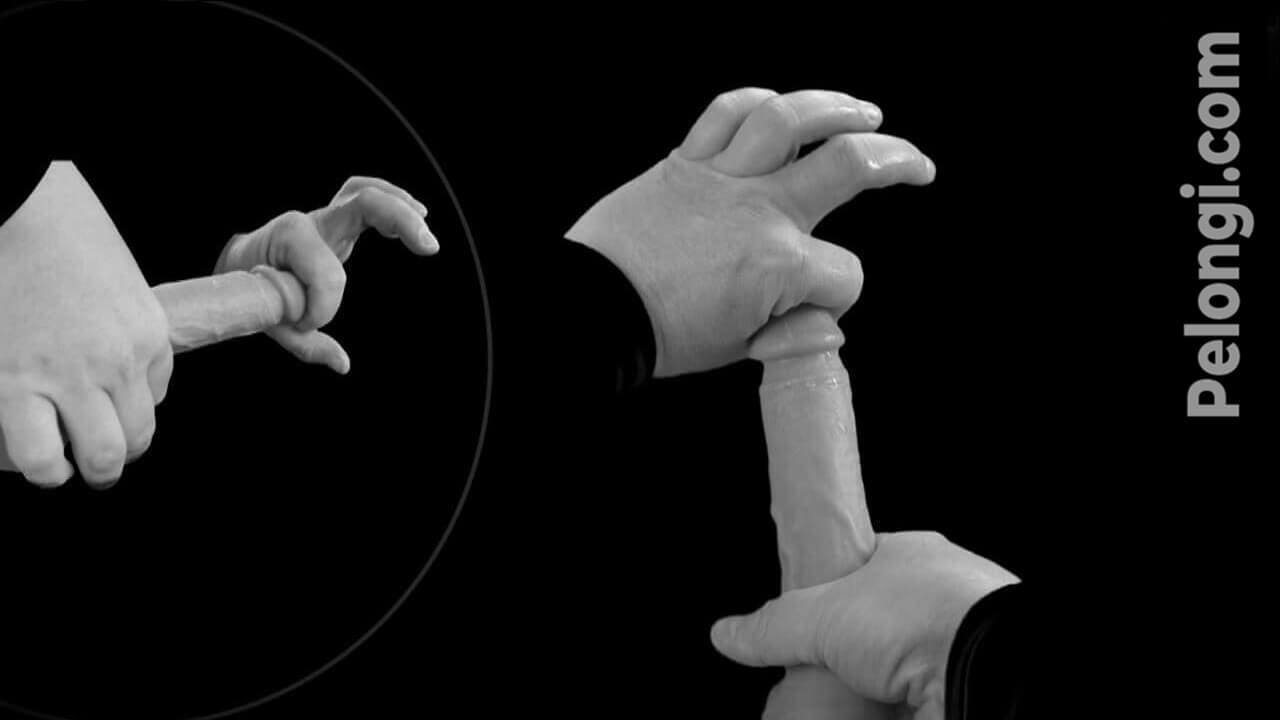 The Horse Squeeze to improve penis size concentrates its exercise intensity on the horizontal overstretching of the erectile tissue. This penis enlargement exercise mainly expands the middle part of the shaft. It is an intensified form of the Uli Squeeze, since the congestion of blood at the base and additionally at the glans are combined.

Apply lubricant to hands and penis.

With first hand, form a tight standard OK-grip as close to the base as possible.

With second hand, form a tighter OK-grip and move it slowly over the glans towards the penis crown. Strengthen the grip of the first hand to further increase the pressure on the erectile tissue. Hold squeeze with both hands for the suggested rep time.

Release the grip at the base and shaft for a few seconds. Repeat from step 3 until reaching the suggested number of reps. Alternate hands between sets.

The Horse Squeeze is a very intensive penis enlargement exercise that is only recommended for experienced users. Because of the concentration of the pressure, the risk of injury during this exercise should not be underestimated.In order to perform this exercise, an erection must exist, and its degree also determines the intensity of the exercise. At the beginning it is therefore advisable to start the exercise only with a less pronounced erection in order to be able to test the strain on yourself. With usual use, intensive erections can then also be chosen as the basis for exercise. The use of lubricant is necessary for the execution of a Horse Squeeze. Repeat the alternation of intensified and relaxed grip as often as you have set your training schedule. Pay careful attention to the reaction of your penis when performing the exercise and avoid overloading the erectile tissue, which can be seen, for example, in small burst blood vessels.

The following notes treat common questions regarding this exercise and provide further explanations of its fine-tuning and possible modifications.

The intensity of blood congestion grips should be increased with special care, as the erectile tissue is quickly expanded to an extreme level. Basically, an increase in intensity is always controlled by three adjusting screws: the predominant EQ (Erection Quality) for the exercise, the targeted use of Kegel-Clench and the pressure strength of the congestion grip. If you want to increase the intensity of the exercise, you can choose a more pronounced initial erection and/or a firmer grip, which then inhibits the circulation of the blood more strongly and ultimately congests it more effectively in the corpora cavernosa. The use of Kegel-Clench (i.e. the targeted pumping of blood by using the pelvic floor muscles) can increase this effect even more by briefly loosening the grip when performing the Kegel-Clench and then tightening it again to keep the pumped blood in the shaft. In principle, it is advisable to test a blood congestion grip only with moderate EQ at the beginning to get a feeling for the effect of the exercise. In the long run, this will allow you to gently approach a suitable intensity of execution. It should be noted that not the greatest possible intensity or overstretching is also the best. The cavernous bodies can also be quickly overtaxed, which then nullifies the beneficial effect of the exercise or even reverses it.

For Horse Squeezes, a wide variety of means can be used to ensure that the exercise runs as smoothly as possible. On the one hand, any kind of care oil (e.g. baby oil or massage oil) that does not contain irritants (these can attack the glans mucosa and should therefore be avoided) is suitable. Most edible oils (e.g. sunflower oil or olive oil) can also be used for workout without hesitation. On the other hand, care creams and lotions can also be used (e.g. classic body lotion or hand creams), although there are even products in this segment that are specially designed for use on the penis. Healing ointments (e.g. Bepanthen or Zinc ointment) can also be used, whereby it is all the more important to make sure that the ointment is not a heat, pain or muscle ointment (such as Finalgon or Voltaren). These irritations of the mucous membranes of the glans and the sensitive skin of the shaft are extreme and can cause great pain or cool numbness - neither of these conditions are conducive to workout. In this respect, one should also be careful when using zinc ointment, as it has a drying effect that may irritate the mucous membranes of the glans. In general, all the listed remedies have their advantages and weaknesses: While oils retain their gliding properties for a very long time, they can only be removed afterwards by thoroughly washing your hands and intimate area. Creams, lotions and ointments, on the other hand, are absorbed quickly (so they have to be taken now and then during exercise), but do not require any additional cleaning (and also care for the penis skin). However, the consistency of ointments is often a problem, e.g. zinc ointment is very tough and therefore only has comparatively low sliding properties. All in all, the use of commercially available body care creams or lotions is usually preferable. The reduced cleaning effort after the workout and the skin care properties are considerable advantages for the workout design. In case of doubt, however, one should simply test for oneself which lubricant is most pleasant for oneself.